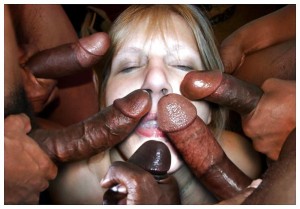 I’ll tell you about my wife’s gang bang experience.

She had wanted one for awhile. We had swung with some people, but she wanted to do it with some strangers. It took a lot of planning but I was finally able to set it up.  All she had to do was show up.

I set her up to meet me at a large nature park not far from where we live. She was to meet me there after work. When she got there, she saw my car parked by this trail we had walked a couple of times. As expected she walked down the trail.  She was not alone. As she neared a somewhat secluded area that used to be set up for picnickers she was surprised to find to guys, one black and one white. She asked them if they had seen anyone go by lately. The white guy said they hadn’t seen anybody come by in a long time. He added he hadn’t seen anybody as good looking as her in a really long time. The black guy laughed. My wife became nervous and started to head back up the trail. The black guy asked her what her hurry was.

She started to run. She was suddenly grabbed from behind. She tried to scream but a hand was put over her mouth. The two men dragged her back to the picnic area. She was gagged with a strip of cloth. As the black guy held her by the hair and with a hand around her throat, the white guy began to touch her all over. Suddenly he tore open her blouse. She again tried to scream. Both the men laughed. The black man slipped his hand inside her bra. He told the other guy that her nipples were getting hard. The white guy ripped her bra off her squirming body. He started to roughly suck on her cute little tits. He looked up into her blue eyes and said “Now for the main course.” Both men dragged her struggling half naked body over to the old cement picnic table and put her up on it. As one man held her down, the other man tied her flat to the table. She was laying face up on top of the table completely spread open. Once she was tied up, the black guy shoved her skirt up around her waist. He savagely yanked down her pantihose and ripped away the flimsy thong underwear she was wearing. My wife lay there naked and helpless, her arms tied up, unable to fight anymore or cover herself. Both of the men stood back and my wife saw to her dismay that they were taking off their pants.

The white guy had a big cock, but the black guy was really huge.  He walked up and roughly started sticking his fingers up my wife’s pussy. He said, “hey man, she’s getting wet!” The white guy leaned over and told my wife that she should cooperate and not scream if she wanted to stay alive. He took of the gag and my wife started to beg for the men to let her go. The white guy responded my kneeling up on the table and shoving his cock in my wife’s face demanding that she “suck his fat prick.” She hesitantly started to do so. The black guy had about three fingers in her cunt now. He shouted to his friend that she was really getting wet. Occasionally he would stick his face down there and roughly suck on her pussy and clit. He suddenly stuck a big wet finger up her ass! She screamed around the cock furiously ramming in and out of her mouth. Suddenly the black man climbed up on the table between my wife’s long white legs. She looked up just in time to see him looming there. His cock looked monstrous. With one thrust he impaled her little pink pussy with his black cock. He began fucking her with long deliberate strokes.

Suddenly all this sexual activity began to get to her because my wife began to respond! She was starting to fuck the man back, her hips lifting up from the cold concrete table. The black guy started to fuck her even harder. My wife was now starting to cum. The guy in her mouth suddenly pulled out and began shooting his spunk all over her face. He then started rubbing her face with his cock. The black guy started flexing his ass and he groaned like an animal as he unloaded about a gallon of fluid into my wife’s hot pussy. As my wife began to come down from her sexual high she began to worry about what the men were going to do next. Just then three guys with fishing gear came around the corner. My wife yelled at them and they ran over. She told them she had just been raped as the two guys who had fucked her tried to put on their pants and run. Suddenly her eyes met with one of the fishermen. He looked at her and said “It looks like we got here too late fellas we might have to settle for sloppy thirds”. He started to rub his crotch hard. The two rapists stopped and looked at the fishermen and then at each other.

All the men started to laugh. The black guy said “I don’t care who fucks her pussy next, but I got to get me some of that cute mouth and tight ass. One of the fishermen said,”lets change her position.” They untied her and moved her face down across the table. They tied her ankles to each end of one of the benches. They tied her arms out toward the ends of the other bench. The black guy walked up to her and shoved his big cock halfway down her throat. My wife did not have any choice but to swallow. He thrust hard in and out of her mouth. Out of the corner of her eye she saw the other naked men moving in. The big black man said, “nobody better fuck her ass because it belonged to him.” So the other men started taking turns on her very sloppy pussy. Finally the black man came in her mouth. By now two of the men had filled her pussy even more. One man who couldn’t wait had beat off on her back while roughly fondling her tits. Now some of the men who had fucked her pussy started fucking her mouth. She could taste the mixture of sperm and pussy juice. She came again and again herself, unable to control her sexual passions. In between getting orally fucked she managed to tell one of her captors that she had to pee. One of the guys fucking her said “So go ahead and piss, bitch”. She finally let go and did with her piss splashing down on her legs. Surprisingly to her this made her come again.

With that the black guy said he was going to fuck her ass. She begged him not to saying he was too big. He went behind her and shoved his black monster up her cunt to get it good and wet. Then he slowly started to put it up her ass. She began to scream and one of the men put his prick in her mouth to keep her quiet. Before long the black guy was fucking her ass with his whole cock. She could feel his big balls slam the cheeks of her tight little white ass as he slammed it in to the hilt. She began to come again and passed out. When she woke up she had been untied. She was on the ground straddling one of the men. She had his cock in her pussy.  Another man was in her ass and the black man was pushing his big cock past her lips. With this she lost it. She began fucking these guys like crazy thinking that maybe she could make them leave her alone if she fucked them dry. She was triple banged for almost an hour. She passed out again.  She woke up in an old bed in a dirty little cabin. She had been given a bath. She was chained to the bed. There was some food there. She ate it and drank some of the water. Suddenly the door burst open and there was the men who had ravaged her.

She screamed. They laughed and told her she could scream all she wanted. They began again what ended up being a weekend of fucking and sucking that featured my lovely wife. In the end they had fucked her like few woman have ever been fucked. They even forced her to be eaten by two other woman and to service them as well. The woman were really into it, fucking her with all kinds of things including their fists and various dildos. They in turn fucked and sucked each other as well as some of the men.  When she was finally allowed to leave, she was blindfolded and brought home. She was deposited naked on our front door step. She quietly came in the house and sat down. She looked at me and asked me how much it had cost to have her ravaged that way. I said most of it had been free. I said I had to pay rent on the camera, but that hadn’t cost that much. The next time we fucked, she rode me with my cock up her ass (it fits nicely now) while playing the video tape.  That was almost a year ago.

We have now joined the swingers club that my wife was initiated into.  Her new black friend (and his new girlfriend) are becoming good friends.  My wife loves eating her pussy while Henry uses that big black cock on her ass.  She has also helped initiate a few new woman to the group.  She espiecially likes using a nice big double headed dildo I bought her.  She has found a new side of herself and has become the slut she has always wanted to be.  She asked me the other day when she could visit the park again.  I told her maybe soon.  Wehave almost worn out the tape and it is time to make a new one.