A Whore is Born 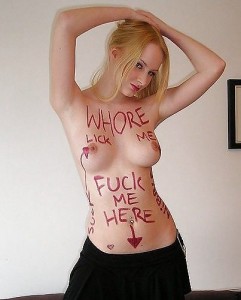 Kathy was pissed! She looked at the clock for the tenth time in the last hour, her anger mounting until she could no longer control herself.

Tears welled up in her eyes, and she went into the bathroom to get a tissue. She looked in the mirror as she dabbed at her eyes, being careful not to smear her makeup. Today was her twentieth wedding anniversary with Walt. She had planned on having a romantic evening with her husband, beginning with a candle light dinner at their favorite restaurant. She was wearing an outfit designed to arouse him, and set the stage for after dinner activities. A sheer white blouse with an ankle length skirt, slit to mid thigh, and the highest spike heels she could find. The only underwear she had on was a pair of jet black thigh high stockings.

But Walt wasn’t home, and it was already an hour late. Oh yes, the bastard had called to say he was running behind, but that he would be on time for their dinner reservations.

“Fuck him!” Kathy exclaimed loudly. “I’ve had enough of this bullshit!”

She threw the tissue into the waste basket and went downstairs. She grabbed her black leather coat from the closet and her car keys and purse and headed for the garage. She didn’t have a clue where she was going, but she was dressed for an evening out, and she was going to have an evening out!

She drove for a while, not paying particular attention to her surroundings. It was dark out, and she didn’t really know where she was.  The lights for a bar on the corner caught her attention. Her temper hadn’t subsided much, and she was ready to do something spiteful that she could throw in Walt’s face. She was beginning to smile as she pulled into the parking lot of the bar.  The lot was nearly full, but she found a parking space next to a light blue Lincoln. As she opened her door to get out, the slit in her skirt revealed her left leg all the way to her crotch. She started to pull it down, then laughed.

“Maybe someone will enjoy the show,” she muttered to herself. She locked the car and headed for the entrance.

As she walked into the bar, the thick smoke almost made her cough. She was a non-smoker and rarely, if ever drank. She slowly walked over to the bar and found an empty stool. She sat down and the bartender came over to her.

“What can I get you, sweetheart?” he asked.

Kathy paused a moment before answering.  “A double vodka martini, please.” she finally answered.  As the bartender made her drink, she looked around the bar. Immediately she noticed that most of the people in the place were black.

“Here you go, darlin’” the bartender said as he placed her drink on the bar in front of her. She reached for her purse to pay for the drink. “Nah, this one’s on the guy at the other end.” The bartender pointed down the counter.

Kathy looked and saw a large black man raise his drink to her. She raised hers back without hesitation, and smiled at him. He rose and came down the bar to stand next to her.

“And what brings a lovely lady like you to a place like this tonight?” he asked her smoothly.

Kathy took a sip of her martini before answering. “I’m celebrating.” she said. Her new found companion raised an eyebrow.

“No,” she took another drink. “Wedding anniversary.”

The man took half a step back. “Husband meeting you here?”

The black man smiled and moved a step closer. He motioned to the bartender to refill Kathy’s drink. “So you’re all dressed up with no place to go.” he stated matter of factly.

Kathy picked up her fresh drink and downed half of it in a gulp. “That’s right. All dressed up, but I did go someplace. I’m here and I’m going to celebrate!”

The man smiled broadly. “Well if you’d like some company, my name is Stephen.”  He held out his hand.

She looked at it for a second, then reached out to take it. “And I’m Kathy.” She looked at her new found friend and smiled. He held up his glass and gently clicked it against hers.

“Would you like to sit at a table?” Stephen asked her.

“Sure,” she answered. The bartender brought her another drink, and Stephen offered her his hand again. She took it and he led her to a small booth in a back corner of the bar. She slid in and he sat next to her. He smiled at her as she sipped her fresh drink.

“Ever been here before?” he asked.

Kathy shook her head. “Nope. Never been in here.” The vodka was making her feel warm and flushed.

“What was that?” Stephen asked, not sure what he had heard.

“I said I hadn’t come yet tonight.” Kathy looked straight into his eyes. “But I may.”

Stephen smiled at her and placed his hand on her knee. He bent forward slowly toward her until their lips met. Kathy moaned at the contact, and her lips parted slightly, allowing his probing tongue to enter. As their kiss grew deeper, his hand slid up her leg inside the slit in the skirt. He found the top of her stocking and briefly played with the elastic before continuing up her thigh. As his fingers brushed her pubic hair, she gasped. When he slowly slid a finger inside of her, she opened her legs to give him better access.

“Mmmmm baby, you are one wet mother,” Stephen whispered in her ear as he eased a second finger into Kathy’s sopping pussy. In response, she reached over and stroked his stiffening cock through his pants.  “Yeah, you are one hot bitch!”

Kathy unzipped his fly and reached inside. Carefully, lovingly, she pulled his cock out. She got her first good look, and gasped. “Oh my God, it’s huge.”

Stephen smiled at her. “Bigger than your old man’s cock, huh?”

Kathy nodded in awe. “You’re twice the size.” She stroked the throbbing pole gently. “Maybe bigger than that!” She stroked him harder, squeezing his cock, and a big drop of pre-cum oozed from the slit.  Greedily she bent over and licked it off.

He laughed as she said that. “Poor girl, you married a man with a little boy’s dick. No wonder he’s never home. He ain’t got the right tool for the job.”

Kathy finished her third double martini and then leaned back over Stephen’s stiff cock. She kissed the head tenderly, running her tongue into the slit to get any more of the pre-cum hiding there before engulfing the entire head in her hot mouth.

“Damn, baby!” Stephen exclaimed. “You sure do love to suck black cock, don’t you?” He waved to the waitress and ordered Kathy another two double martinis.

Kathy was lost in her exploration of this monster prick. Walt had about a five inch cock when he was really excited, and more like four on a normal night. This glorious pole was at least ten inches long, and six inches around. She could barely get the silky smooth head into her mouth! She wasn’t sure if the dizziness she felt was from the martinis or her mounting lust for this man. All she knew was that she was going to have this cock inside of her.  She came up for air and Stephen handed her another drink. She giggled as she downed the entire drink and set the empty glass on the table.

“I love your cock!” she told him as she continued to stroke him. “It is so big and black and hard.”

Stephen smiled widely. “You’ve never had a black cock before, have you Kathy?”

She shook her head slowly. “No. I’ve never had any cock but Walt’s.”

“Well then, you are in for the best night of your life.” Stephen kissed her, and his smile turned wicked. “I want you to straddle my cock right here and now.”

Without a word, Kathy hiked her skirt over her hips. She raised a leg over Stephen’s lap and swung around so she faced him, poised over his massive prick. She reached down and grabbed it, guiding the head until it rested against the inviting lips of her cunt. Looking into his eyes, she slowly began to lower herself, feeling the bulbous head gradually pushing inside of her. Soon the entire head was engulfed in her warm pussy, then the first inch of his shaft. Kathy exhaled deeply, as though the huge cock were forcing the air from her lungs. “So big,” she mumbled. Stephen handed her the fifth martini, and she gulped that one down too.

Stephen placed his big black hands on her creamy white hips and began to pull her down onto his rock hard pole. Two, three then four inches slid easily into her. Then she felt her black lover pushing past the deepest point her husband had ever reached. Seven, eight, nine inches filled her hungry love tunnel to bursting. With an inch remaining, Stephen placed his hands on Kathy’s shoulders and forced her down. The last of his cock slid into her until she was resting on his balls, her pubic hair meshing with his. He held her there for a full minute before he began to really fuck her. Kathy was in heaven.  Her first orgasm hit when Stephen forced the last of his beautiful prick into her. She knew then and there that she would do anything that this man demanded from her. That she would never be satisfied with the pitiful excuse for a cock her husband had been fooling her with for twenty years. She began to ride the stiff cock, slowly rising up and then settling back down. First an inch at a time, then two, then six. Soon, she was humping Stephen like some street slut, and the sound of their flesh slapping together could be heard two booths away.

“Fuck that white bitch, Stephen!” the waitress called out as she went by. “Fuck her good!”

Kathy lost track of time and her surroundings. All she could feel was the continuous orgasm in her pussy, the waves sweeping over her one after the other. She thought she felt Stephen getting even bigger inside of her. The realization that he was about to cum inside of her didn’t register until he slammed her down on his cock and held her there. She felt the hot spurting deep inside of her womb as his seed pumped from his balls and into her still fertile uterus. She was amazed as she felt three, four, five massive spurts shooting into her, and she came one last time. She must have passed out just about then.

“He’ll be back tonight if you want some more.”

As she drove home, Kathy was already trying to figure what she would wear when she came back to see Stephen.

This really had been the best anniversary ever!