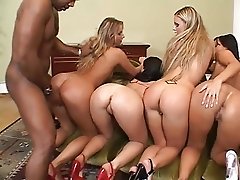 “Hey, everybody,” Gene shouted, “watch this,” just before in did a wild  somersault off the diving board into his back yard pool. The rest of the  crowd gave him a mock standing ovation and Tom called out, “I’d give that  one a three and a half,” and everyone roared with laughter and then went  back to making conversation and nursing their drinks! It was the usual  crowd, the four couples who had been fast friends since they moved into the  subdivision twenty odd years ago. In the summer it was swimming and golf,  while during the colder weather, it was bowling or cards, take your pick.  So comfortable were these couples together, that from about the second year  of their friendship, they started skinny dipping together in Gene and  Katie’s pool, and of course today was no exception as they splashed about  and enjoyed each other’s company. Cal was over at the grill doing the  burgers and dogs thing, while Marie and Winnie sat on the edge of the pool  with their legs dangling over the edge while talking and sipping on some  iced tea. Winnie was right in the middle of telling Marie about her last  appointment with the dentist, when like a stealth submarine, her husband  Troy emerged from the water between her legs and went straight for her hairy  pussy.

Stunned for a second, Winnie gave her husband a playful rap on the head and  said, “Not now silly, there are too many people watching us,” but not to be  deterred, he just laughed and said, “Well, let’s give ‘em a good show then,”  and quick as a cat, reattached his mouth to his wife’s pussy. When she  sensed that it would be useless to resist him, she leaned back on her arms  and let him tongue wet slit in front of the whole crowd. Every week is was  someone else who got things going, and this week it just happened to be Troy  and Winnie. “Hey, Gene,” Cal sang out, “it’s a good thing you don’t have  any neighbors close by, cuz I think those two are breaking a few zoning  ordinances, like eating pussy in a public place. Again everyone laughed,  but this time, more subdued, as the undercurrent off sexual tension was  beginning to permeate the air, and Winnie’s heavy breathing and soft moaning  was beginning to get everyone in the mood. While the group didn’t do a  whole lot of swapping, once in a while two of the women would pair off and  maybe do a sixty nine or strap on a dildo, so no one was surprised when  Marie, still sitting next to her friend, leaned over and took one of  Winnie’s suntanned nipples into her mouth and gently began sucking on it.

It was a very erotic sight, a pretty woman getting her pussy eaten by a man  in a pool, and then getting a suck job on her breasts by another woman.  Now, no one was in the mood for any jokes, and as if by magic, all three of  the other men quickly attained erections, which of course they all started  to slowly fist in their hands. Katie, seeing that Gene was jerking his big  cock, sat down on the chair in front of him, took him into her mouth, and  began sucking him softly as he sighed, “Oh my, I never get tired of this,  suck it for me, hon.” Although they all liked a good fucking, this group  was ravenously oral, and in most cases the men would end up ejaculating into  the women’s mouths, and of course, the women would drench their husbands’  faces and mouths with oodles of hot cunt juice. Winnie’s breathing had now  become very shallow and irregular as Troy’s mouth attacked her vagina like  the Germans were invading Poland, and while offering little or no  resistance, she spread her legs as wide as they would stretch to afford her  husband maximum access to her now quivering cunt.

The three of them received a tepid round of applause, but it was hard to  clap when you yourself was on the verge of climaxing. Gene had his hands  on his hips with his crotch stuck out lewdly so as to afford his wife a  better angle on his throbbing dick, while Cal and Dora were intertwined in  the hammock with Cal’s big cock deep inside his wife’s pussy. Only Tommy  was being left unattended, and it was his job to make sure that the food  didn’t get burned up on the grill.

Now it was Gene’s turn to feel the heat. Katie was expert cock sucker, and  it was all he could do to keep from shooting in her mouth right then and  there, because of all the women in the group, Katie was by far the best at  controlling a man’s orgasm. At one time or another, each of them had  experienced her talented mouth, and even though their own wives were very  good, they all agreed, that Katie had a PHD from Cock Suck U. It was truly  amazing, you wouldn’t even be near an orgasm, and the little bitch would  turn up the heat a notch, and in no time flat you would be flooding her  mouth with a geyser of cum, while on the other hand, she could hold you on  the ragged edge for as long as she wanted to, until she felt you’d had  enough punishment and let you jack it into her waiting mouth. It was like  that for Gene right now, he thought he was close, but Katie kept him just a  smidgen away from release, ever so close, but ever so far. It was game  Katie played often, and the other men in the group teased Gene incessantly  about his wife’s ability to control his pecker. “Eight inches of hard  steal,” they sing, “and a little one hundred ten pound woman pulls its  string like it was a marionette.” Gene would act hurt, but he knew he was  the lucky one, because even though she drove him batty with her little suck  game, when she finally did allow him to climax, well, it was the most unreal  cum you could ever imagine.

“P-please, babe,” he pleaded, “let me do it, I’m so close.” “That’s it,  Katie, make him pay, he’s been a bad boy,” shouted Troy from the pool.  Marie was more sympathetic and allowed, “Oh come on, Kate, let the poor man  have his little cum, he looks so desperate.” Katie chuckled without  releasing Gene’s pecker, she really loved teasing him, rolled her eyes to  meet his, winked, and add just the right amount of pressure to the underside  of his mushroom head, that allowed him to spill his sperm in buckets into  her hungry mouth. Troy, who had just hopped out of the pool, had to grab  him to keep him from falling over it was such a draining experience.  “Judas priest, Kate,” Troy opined while helping Gene to a pool side chair, “  you can really be a sadist when you want too.” Eyeing Troy’s big hard cock  she asked sweetly, “Do you want some it too, big boy?!?” “I’m very happy  with my own wife, thank you,” he shot back with a laugh.”

At that point, everyone had forgotten about Cal and Dora, but a loud wail  from Dora turned their attention immediately to the wildly gyrating hammock!  “Look at ‘em,” Troy said with a chuckle, “just like a couple of teenagers on  Saturday night in the back seat of a Chevy.” Gene, who by now had regained  his sapped strength said, “They’re almost like a couple of wild animals, I  think they might wreck my hammock.” “Say,” Troy opined, “what do they do  when they want to break up a couple of dogs who are fucking!?!” “I dunno,”  Gene replied, ‘”spray ‘em with a hose, I guess.” “Or,” Troy said evilly,  “they grab the hammock and toss it in the pool.” “Now wait a minute boys,”  Kate and Marie said in unison, “don’t do anything hasty.” It was too late  of course, Gene grabbed one end and Troy the other, and on the count of  three, the two helpless fuck mates were flying through the air and into the  pool, while locked in a sexual embrace.

Gene and Troy ran into the house and locked the door to keep the irate Cal  from braining both of them, but it was over pretty quickly, and soon even  Cal had to admit that it was a trick they couldn’t pass up. And that’s the  way it was on those lazy Saturday afternoons in the suburbs, a little food,  a little drink, and a little sex.